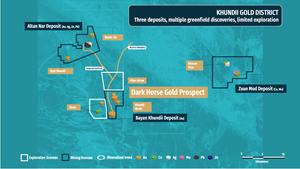 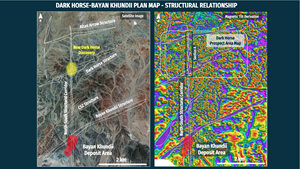 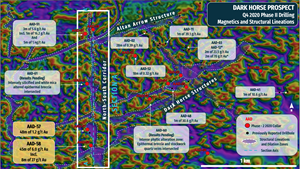 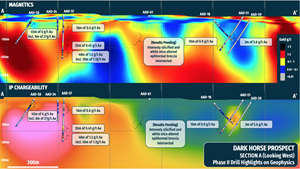 Quotes from the Company:

“The Dark Horse prospect has been established as the most significant zone of gold mineralization since our discovery of the Bayan Khundii gold deposit,” said Peter Akerley, Erdene’s President and CEO. “These new, high-grade drill intersections, combined with the geophysical and geochemical signatures traced over a four kilometre mineralized trend, demonstrate the significant size potential of the newly defined Dark Horse prospect.”

“I would like to congratulate and thank our exploration team for the continued success. This team has delineated three deposits and discovered multiple prospects, including this new Dark Horse discovery in our Khundii Gold District,” continued Mr. Akerley. “These intercepts are a discovery in their own right, however, they also substantially increase our understanding of the gold potential of the broader Khundii system, providing multiple targets with similar structural and alteration characteristics. We are very excited by these results and look forward to initiating our 2021 exploration programs this quarter which is expected to demonstrate that Erdene’s Khundii District hosts a world class gold system.”

The phase II Dark Horse drill program was completed in early December 2020 with an additional 3,085 metres drilled in 14 holes. In total, Erdene drilled 4,660 metres in 25 holes (AAD-40 to 64) at Dark Horse in 2020. The phase II program built upon results from phase I including proximal pathfinder element (arsenic, molybdenum and antimony) drill intersections, magnetic-low anomalies and gold-in-soil anomalies associated with major structures, particularly structural intersections and interpreted zones of dilation.

This newest discovery is located within a relatively under-explored area of the Dark Horse prospect. Situated along a north-south (N-S) trending structure traced by a magnetic low signature, local exposures of epithermal breccia and stockwork veining exhibiting gold anomalism in soil over a trend of approximately 4 kilometres. The N-S structural feature targeted by holes AAD-51, AAD-57 and AAD-58 and AAD-61 is located one kilometre west of AAD-48 (see October 26, 2020 release). This N-S feature has been traced over a 3-kilometre strike length from the Altan Arrow structure in the north to the CSZ Zone in the south, and continues further, one kilometre where it connects with the Bayan Khundii deposit; all lying within Erdene’s 100% owned 2,309 hectare Khundii mining license.

The new discovery area (AAD-57 and AAD-58) is located proximal to the intersection of the N-S structure and the NE trending Dark Horse structures with associated gold in soil anomalism, pronounced magnetic low and high IP chargeability signatures. Over one kilometre north from AAD-57 and AAD-58, along the N-S structure, hole AAD-51 returned multiple anomalous gold zones including 3 metres of 5.6 g/t gold at 138 metres and 10 metres of 0.9 g/t gold at 222 metres down-hole depth. One additional hole has tested the northern portion of the structure with results pending; AAD-61, located 500 metres north of AAD-57. South of the new discovery area, the N-S structure continues (untested) for 1.3 kilometres to AAD-33 (85-metre hole in CSZ Zone drilled in 2019) where drilling intersected a thick package of silicified and white mica altered volcanic rocks consisting of tuff and porphyritic dacite with quartz-hematite veins and stockwork breccias with moderate to intense disseminated pyrite, broad zones of pathfinder elements and low levels but anomalous gold.

1 Reported intervals are apparent thicknesses (i.e. downhole widths). Insufficient drilling has been completed at Dark Horse to determine orientation of the mineralized zones and therefore true widths cannot be determined at this time. Exploration drill holes are typically oriented normal to (at a right angle to) the trend of potential mineralized targets and holes dips range from 45 to 75 degrees.

2 Reported grades for intervals are weighted averages based on length of sampling intervals, typically 1 to 2 metres. No top cut has been applied; however, intervals greater than 10 g/t gold are reported separately for clarity.

3 Seven of the eight 1-metre samples in this interval returned assays greater than 10 g/t gold, the eighth sample returned an assay of 9.5 g/t gold. The highest grade interval (43-44 metres) is reported separately.

The N-S feature is clearly evident on the magnetic survey map (see plan maps below), as are numerous zones of intersection between this structure and northeast trending structural lineations, characteristic of the Dark Horse prospect. Current structural interpretations suggest the N-S trending structural features represent zones of dilation formed during tectonic compression from the South Southwest (Kloppenburg 2017).

At surface, AAD-57 and AAD-58 are located within a porphyritic andesite unit and a series of residual silica quartz bodies (200 to 300 metres wide), possibly indicating a higher level epithermal or lithocap type environment. Holes AAD-57 and AAD-58 are located 180 metres apart and reside within a broad (approximately 100 metres by 500 metres) north-south elongate magnetic low bisected by a northeast structural lineation. This magnetic signature is currently interpreted as a zone of primary magnetite destruction through intense hydrothermal alteration. Induced polarization (IP) geophysics indicates a relatively intense chargeability high signature coincident with the magnetic low signature and soil geochemistry in the prospect area reflecting the high sulfide content of the alteration zone.

AAD-57 is a 251-metre hole drilled at a dip of 75 degrees along an easterly (90 degree) azimuth. This hole was collared 180 metres north of AAD-58 as a follow up to exploration drill hole AAD-34 completed in 2018, which returned anomalous gold, arsenic, antimony and copper. AAD-57 is located proximal to the N-S / NE structural intersection, and intense magnetic low and chargeability high signatures intersected within AAD-58. AAD-57 was drilled within an intensely white mica (sericite) altered and moderate to intensely silicified tuffaceous and brecciated volcanic sequence. The gold mineralization within AAD-57 is associated with broad zones of intense silicification and white mica (sericite) alteration dominated by quartz-carbonate-sulphide (arsenopyrite ± pyrite) stockwork veins. Like AAD-58, AAD-57 exhibits sulphide (arsenopyrite and pyrite) concentrations and anomalous antimony coincident with the gold mineralization although the intensity of sulphide oxidation in AAD-57 is not as high as in AAD-58, likely due to its increased depth.

Diamond drill holes AAD-52 and AAD-55 also intersected anomalous gold in other areas of the Dark Horse prospect, including the following highlights: AAD-52: 18 metres of 0.3 g/t gold, from 42 down hole depth and 3 metres of 1.0 g/t gold at 83 metres, and AAD-55: 2 metres of 2.3 g/t gold, beginning 4 metres down hole. These areas will be further evaluated, and the results incorporated into future exploration programs.

Since confirmation of the first community transmission of COVID-19 in November 2020, the Government of Mongolia implemented a series of restrictions on the movement of people and delivery of goods and services. The Company’s Mongolia-based personnel have continued to work safely in accordance with Company and national protocols, concluding field programs in December 2020. While restrictions have been eased in the majority of the country’s territory, measures remain in place in Ulaanbaatar until at least January 11, 2021. In Q1 2021, the Company plans to re-mobilize and commence field programs in accordance with the Government’s guidelines for mining and mineral exploration activities.

The Company extends its appreciation to essential workers for their efforts to safeguard public health and help prevent the spread of COVID-19 in Mongolia and Canada.

Erdene’s deposits are located in the Edren Terrane, within the Central Asian Orogenic Belt, host to some of the world’s largest gold and copper-gold deposits. The Company has been the leader in exploration in southwest Mongolia over the past decade and is responsible for the discovery of the Khundii Gold District comprised of multiple high-grade gold and gold/base metal prospects, two of which are being considered for development: the 100%-owned Bayan Khundii and Altan Nar projects. Together, these deposits comprise the Khundii Gold Project.

The Bayan Khundii Gold Resource1 includes 521,000 ounces of 3.16 g/t gold Measured and Indicated (“M&I”)² and 103,000 ounces of Inferred resources at 3.68 g/t gold. Within the M&I resource, a proven and probable open-pit reserve totals 409,000 ounces at 3.7 g/t (see the full press release here), providing significant potential growth of reserves with the development of the remaining M&I and Inferred resources2.

In July 2020, Erdene announced the results of an independent Feasibility Study for the Bayan Khundii Gold Project (press release here). The Feasibility Study results include an after-tax Net Present Value at a 5% discount rate and a US$1,400/oz gold price of US$100 million and Internal Rate of Return (“IRR”) of 42%. The Feasibility Study envisions an open-pit mine at Bayan Khundii, producing an average of 63,500 oz gold per year, for seven years, at a head grade of 3.71 g/t gold, utilizing a conventional carbon in pulp processing plant. Production is expected to commence in early 2022 based on the current project schedule.

Erdene Resource Development Corp. is a Canada-based resource company focused on the acquisition, exploration, and development of precious and base metals in underexplored and highly prospective Mongolia. The Company has interests in three mining licenses and two exploration licenses in Southwest Mongolia, where exploration success has led to the discovery and definition of the Khundii Gold District. Erdene Resource Development Corp. is listed on the Toronto and the Mongolian stock exchanges. Further information is available at www.erdene.com. Important information may be disseminated exclusively via the website; investors should consult the site to access this information.

Peter Dalton, P.Geo. (Nova Scotia), Senior Geologist for Erdene, is the Qualified Person as that term is defined in National Instrument 43-101 and has reviewed and approved the technical information contained in this news release. All samples have been assayed at SGS Laboratory in Ulaanbaatar, Mongolia. In addition to internal checks by SGS Laboratory, the Company incorporates a QA/QC sample protocol utilizing prepared standards and blanks. All samples undergo standard fire assay analysis for gold and ICP-OES (Inductively Coupled Plasma Optical Emission Spectroscopy) analysis for 33 additional elements. For samples that initially return a grade greater than 5 g/t gold, additional screen-metallic gold analysis is carried out which provides a weighted average gold grade from fire assay analysis of the entire +75 micron fraction and three 30-gram samples of the -75 micron fraction from a 500 gram sample.

Erdene’s drill core sampling protocol consisted of collection of samples over 1 or 2 metre intervals (depending on the lithology and style of mineralization) over the entire length of the drill hole, excluding minor post-mineral lithologies and un-mineralized granitoids. Sample intervals were based on meterage, not geological controls or mineralization. All drill core was cut in half with a diamond saw, with half of the core placed in sample bags and the remaining half securely retained in core boxes at Erdene’s Bayan Khundii exploration camp. All samples were organized into batches of 30 including a commercially prepared standard, blank and either a field duplicate, consisting of two quarter-core intervals, or a laboratory duplicate. Sample batches were periodically shipped directly to SGS in Ulaanbaatar via Erdene’s logistical contractor, Monrud Co. Ltd.

Photos accompanying this announcement are available at: